His Excellency the Executive Governor of Benue State Samuel Ortom has pledged a continuous support to the pride of Benue state in football Lobi Stars Football Club of Makurdi in order to continually have a strong  developmental football growth in the state. 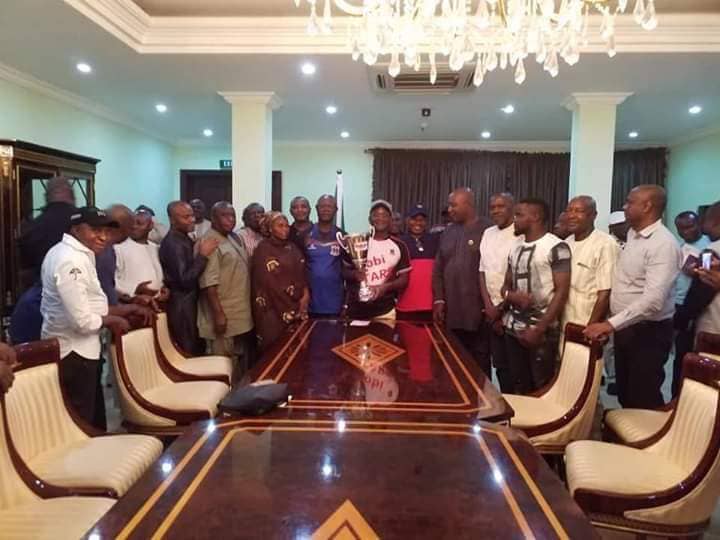 His excellency who spoke at the Government house in Makurdi while receiving a trophy presented to him by the club who emerged as the Super Cup champions of Nigeria about a week ago.
Lobi Stars FC defeated Enugu Rangers by one goal to nil in Asaba,  Delta State,  to emerge Super Champions in a competition organized by the NFF .
The Governor expressed more glimpse of hope that the club would also emerge victorious in the CAF Champions League made to commence in Yaounde, Cameroon on Tuesday due to the team’s wonderful performances in the last football  season .
He stated that the entire state was proud of Lobi Stars’ scintillating performance in football, stating that the victory had created a moment of joy for a people who had not known peace for a long time .
The state Deputy Governor and Chairman of Lobi Stars Football Club, Engineer Benson Abouno, characterized the victory to Governor Ortom’s commitment to the team, make references to financial motivations and prompt payment of salaries of the players.
He concluded by expressing his profound gratitude to God for the Laurel won, promising to do more to continue to make the state proud.

Full text of press briefing by NAF on the death of...

I’LL GIVE MY BEST TO OJU LG INDIGENS | Hwande Speaks

Preliminary report on Tolulope to be released today

ABOUT US
MetroRadio is your online Radio dedicated to bringing you the best news in entertainment, sport, economy, politics, education, tectnology with a simple yet beautifully styled website for you to fine the news and information valuable to you easily.
FOLLOW US
©
MORE STORIES