The music mogul, Don Jazzy, turns thirty-six years today. In honour of his birthday, we will be looking at songs produced by Don Jazzy below: 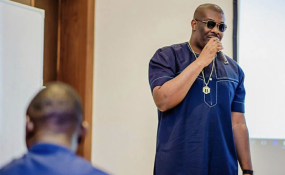 This song was released in 2014 which featured: Don Jazzy, Tiwa Savage, Korede Bello, Dr SID, Reekado Banks, D’Prince and Di’ja. This song won the MTV Africa Music Award for song of the year.

The song featured Don Jazzy, Korede Bello, Reekado Banks and Di’ja. This song was released 2014 and received a nomination for the City People Music Award for best collaboration of the year.

This track was released in 2013 and it featured Tiwa Savage and Don Jazzy.

This song was released on 2012 and featured D’banj.

By 2006, He had produced Nigeria’s biggest albums No Long Thing and Rundown/Funk You Up and had become infamous for his introduction, “It’s Don Jazzy Again!”

2019 election: Why Nigerians must pray more than waste energy on...